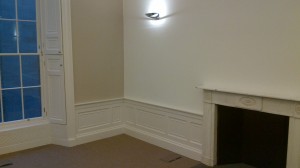 Tasked with assembling a set of kitchen units and small fridge, this is to be used as a Coffee Station in an Office, it required some extra work in the case of the wall having an existing section of paneling which was not to be damaged.

The first step was to assemble the Ikea Kitchen Unit Carcasses. Once the Ikea units were assembled it was then a case of measuring up the wooden paneling to determine how much had to be cut away.

After the Base units were installed and secured to the wall the worksurface could be measured and fitted in place. and then the doors, drawers and shelves could be fitted. The shelves in this case had to be trimmed to fit the reduced depth of the unit. Silicone was also applied around the edge of the work-surface.

To finish off the end of the Coffee station a matching end piece was required and this had to be cut to match the profile of the paneling, more accurately that the carcass as it would be clearly visible and therefor a neat finish was required. Small imperfection would be hidden by the silicone seal.

kitchen end panel cut to fit and sealed with Silicone

The final task to be completed was to cut a hole in the work-surface to allow cable to be plugged in for the coffee machine, and to fit he kick-boards at floor level.